by Sean Ryan
I have to say I have mixed feelings about DC. While a lot of the standalone work is excellent and the Vertigo imprint has put out incredible work, I often feel like the main continuity work is a bit odd. Superman, for instance, feels a bit dated. Batman has become a self-parody. The entire concept of "families" in DC is very bizarre to me. For the most part, I stick to stand alone or Vertigo properties. That said many of those are among my favorite comics: We3, Red Son, Hellblazer, Sandman, Gotham by Gaslight, Y: the Last Man, Watchmen, and Fables. It seems that in many ways DC takes itself less seriously than Marvel and is much more willing to take risks.

I also have to say that I am not too familiar with the Suicide Squad's previous iteration. My awareness of it came mainly out of the growing hype for the new movie. Just a brief glance into online material about the team gave me a list of members I was either unfamiliar with or vaguely familiar with. Except for Harley Quinn.

I am a huge fan of Harley. The character always struck me as complex for a villain in comics. Yes, she's crazy, but she is aware of it and delights in it. Beyond that she is extremely devoted in her love (bordering on obsession) with the Joker. She knows he takes advantage of her and that he is bad for her, but just like real people stuck in abusive relationships she can't seem to escape. Harley is probably my favorite DC villain. So I figured I'd give New Suicide Squad a try.

For those not aware. The idea of the Suicide Squad is that a top-secret military agency with the backing of the President wants to conduct illegal and messy operations. These missions are so dangerous and have such a high impact for political fallout if pinned on the US that they decide the best solution is to use people who they can easily deny and no one would question -- supervillains.

As the new series opens with Pure Insanity, a new program director is appointed to keep an eye on the squad and their handler. He introduces conflict by adding Deathstroke and Joker's Daughter enraging Deadshot and Harley Quinn respectively. An insane disaster follows which ironically does manage to accomplish the tasks. Betrayal, injury, and in-fighting continue but somehow the group makes it out mostly intact.  Black Manta starts to show a glimmer of leadership.

Defective continues the story line with a second mission with Captain Boomerang rejoining the team along with Ninja Man-Bats, which I think is DC's way of reminding us that it is in fact still DC. Again chaos breaks out and again Black Manta's budding leadership seems to pull everything together.

Throughout both stories, a back plot of political intrigue is brewing, sinister multinationals are hinted at, and new adversaries start to lurk. All in all, I think the issues are a great introduction to the team and I have to say I will keep my eyes out for the upcoming issues. 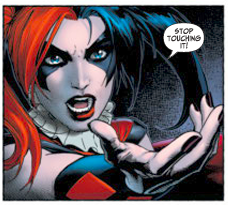 I do have some criticisms. First, I don't like the direction the art for Harley is going. It seems like they are trying to make her too modern-gritty and it doesn't seem to mesh too well of how I envision the character.

Also, the use of multiple artists leads to inconsistencies across the book. Take bonnie:


It also appears the ethnicity of the unnamed Chinese Metahuman was in dispute by the artists:

Also, there are occurrences of very sloppy art like this car:

The worst problem is the seemingly simple matter of how many sides the Pentagon has.


That aside, New Suicide Squad is a ton of fun and I'm really excited to see where it goes!

I received a digital copy of this book for review from NetGalley and the publisher.

Popular posts from this blog

By plb - February 24, 2016
Hothouse by Brian Aldiss Dune is one of my favorite books of all time. So when I had a chance to read Hothouse , another classic ecological science fiction book, I was excited. At first, the book seemed interesting enough. The distant future, the sun is at its hottest, the radiation has made plant life abundant and animals have mostly died off. Humans still exist, but they are barely surviving primitives living short and brutal lives. The book centers around members of one particular family group's struggles. Plotlines start to split as the group breaks apart. Adventures are happening and it seems like a conflict between a sentient fungus and humanity is about to abrupt in world-changing significance. This is where the book goes wrong, one group of survivors story is dropped never to be mentioned again. The second group only shows up in the final pages of the book and is of very small import to the story. One of the main characters dies and is she is forgotten by the next p
Read more

By plb - September 27, 2015
Mr. Penumbra's 24-Hour Bookstore Robin Sloan Well written, fun, fascinating and yet disappointing. I read the book cover to cover in 8 days. I was expecting magical realism. The book implied a TARDIS-like bookstore. The mystery seemed huge and sinister. I loved the elements of history, the utter love Sloan has of books, and the acceptance of technology. I loved that Kat seemed like a real person she had her own life, her own ambitions, she was intelligent, skilled, but not perfect. Every character was real. There seemed to be almost no stock characters. Even Deckle who seems so minor has a life and ambition all his own. So why disappointing. At the end of the story, it all seemed so banal. I expected more. Repeatedly the book seems to be building to something sinister that never comes. My biggest criticism of the book otherwise is the portrayal of Google. The company plays a major role in the second half of the novel. The portrayal is bizarre. It makes us sound more
Read more

You're Never Weird on the Internet (Almost)

You're Never Weird on the Internet (Almost) Felicia Day Working at Google has perks. One of which is the Authors@Google program. The program gets authors to come and speak to Googlers. Felicia Day was the most recent author in the Kirkland office. I'm not the biggest Felicia Day fan, I loved Dr. Horrible and loved her stint on Eureka. But I never watched Buffy, haven't watched The Guild and stopped watching Supernatural by her stint on the show. I didn't know that much about her. Her talk was fantastic and pretty inspiring for those of who deal with social anxiety and depression. So I was really interested in reading her book (bonus I got a complimentary copy for being one of the first XX people to get to the talk). Speaking to her after as she signed my book was probably one of the most stressful moments of my life and I'm sure I came off incredibly awkward. I'm actually disappointed I didn't read her book before because I think my exchange would
Read more